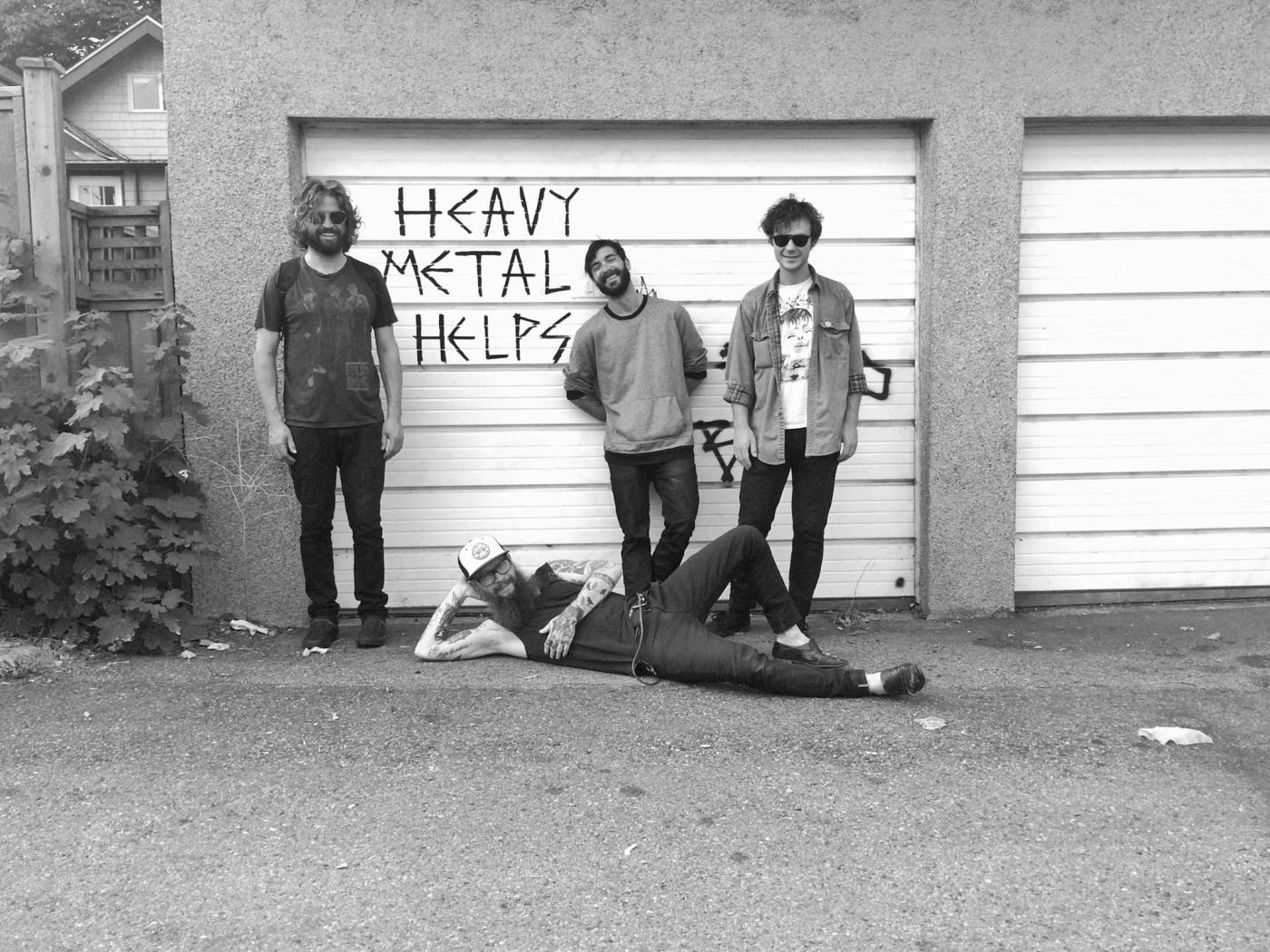 The Dudes have been patrolling the Calgary indie rock scene since the release of their first album, Brain Heart Guitar in 2006, yet remain one of Canada’s most underrated bands; a strangely undiscovered treasure in a market saturated by R&B and teen pop stars.  But what The Dudes have to offer is something entirely different, honest and heartfelt lyrics buried underneath hard rock riffs.  It’s the type of tension reminiscent of the young adult experience, constantly trying to reconcile human emotion with the unmistakable urge to drink our f*cking faces off.

The band is comprised of lead vocalist Danny Vacon, guitarist Bob Quaschnick, bassist Brock Geiger and newest member Matt Doherty on drums.  They’ve been on the verge of stardom for so long that it has almost hit the point of parody, as surely someone with their talent and track record are due for a BIG break.  They’re hilarious, they’re original, and they bleed the type of care-free authenticity that could very well make you want to quit your day job – they’re The Dudes.

Tell us about your ongoing feud with Air Canada?

HA! I didn’t know anyone was paying attention to that feud. I was crazy late for an early flight and I left my brand new Phillip K. Dick book on the check-in counter with my vacation drinking money in an envelope inside. Like a party book mark. I’m paraphrasing, but they pretty much told me to go eff myself. They’re the absolute worst, dirty thieving pricks in the air biz. I love tearing a strip off them any chance I get. Like now!

What can fans expect from your upcoming album?

The new album is FUN. 13 tracks of sing along rock & roll. We recorded it at an alpaca farm in the woods. I got to drive a lil’ golf cart to the studio every morning. I stole a few lines from Jay-Z. He can spare them. I wrote a love song about a girl who is good at hiding my contraband from the cops when they find you at a DQ parking lot.

Which bands are you guys listening to these days?

That last 3 records I played are Run the Jewels (the dark one), Waylon Jennings (I need to go to Luckenbach Texas whenever I’m feeling down) and a $1 copy of Edith Piaf’s greatest hits. I want to do a heavy cover of No Regrets.

Who is the most underappreciated band in Calgary?

We’re probably the most under appreciated band in Calgary. We’ve been filling rooms and selling albums with NO HELP for years. No label, no distro. It’s hilarious. And awesome. But seriously. I should have a way nicer van and cleaner pants for how much work we’ve done. There are a metric tonne of local bands I think you and the world should know. Napalmpom, Mariel Buckley, 36?, Windigo, Cowpuncher. SO MANY MORE. But that’s enough for now.

More From Dash: Alcohol and Your Potential

How has the Calgary music scene evolved since you guys got started?

Everyone dresses different from when we started. Pant’s got a lot tighter. Venues went down, new ones went up. All the while, the indomitable spirit of Calgary’s citizenry remained unblemished, unsullied and RAD. Y’know?

What is the best bar in Calgary right now?

I drink at many bars. Can’t have a favourite. Like a polygamist trying to pick his favourite wife. They’re all special to me! Different bars are the best on different days. Same with wives. Probably.

Tell us about the song writing process?

Song writing starts with living. I like to live an intense life, wake up with regret or jubilation or whatever. Feel things deeply if I can. Then get the boys in the basement to see what happens. Maybe it’s good, maybe it’s awful. Worst case scenario, your new song sucks but at least Bob brought beer and Brock made no less than three great jokes.

Want to Contribute to Dash?

What is on your list of top three favourite movies?

Name your Toronto Blue Jays dream team at all positions.  You can pick any player, dead or alive.

Where will we see you guys playing next?

Our next show is in Edmonton for porkapalooza, June 17th. We’re also playing grilledcheeseapalooza this summer. No joke. We’re suckers for the various apaloozas. Next Calgary show is FolkFest!

More from Dash: Depression, a Couch, and My New Friend Dave

One thought on “The Dudes: Calgary’s Most Authentic and Underrated Band”