I remember sitting cross-legged on the carpet in my living room as a 10-year-old, staring wide-eyed at the 40″ TV screen, a dusty stack of VHS tapes to my right. Robin Williams flashed across the screen, wrestling alligators, jostling with giant spiders, and otherwise igniting my young imagination. I was, of course, watching Jumanji. Most millennials will remember the film as a staple of their childhood, or at the very least, a vital work in the canon of classic ’90s entertainment.

Fast forward to last week, when I watched the trailer for Jumanji: Welcome to the Jungle, an ostensible follow-up to the beloved original. That’s when I realized that my cherished memories have been bastardized by the ruthless Hollywood machine, ground into nothing more than meaningless sequel fodder. This time, it’s personal.

Watching the trailer didn’t upset me, so much as it reached back into my youth and violated it like a deranged boogeyman, leaving nothing but a pair of eyeballs and a steaming pile of bones. And that’s just the trailer! Can you imagine what would happen if I sat through the entire film? Yikes.

The sequel is just a sleazy attempt to parlay our nostalgia into fast cash at the box office, with a blatant disregard for the sanctity of classic movies. It’s time to expose Jumanji: WTTJ for what it really is: a hodgepodge of stolen ideas, a most insidious example of plagiarism. The title, plot, characters, and even some of the scenes are stolen from other popular entertainment. Shall we explore?

The Rock vs. Robin Williams

Dwayne “The Rock” Johnson, who along with starring in the film as Dr. Smolder Bravestone (eye roll), is credited as a producer. In a recent Instagram post, he described the sequel as a “continuation” of the franchise, in an attempt to avoid calling it a sequel or spinoff or follow up. This is just shameless PR-speak, designed to protect against the fact that the newest installation of Jumanji will stray wildly from its source material, while piggy-backing off the popularity of the original at the box office. In the same post, he brought up Robin Williams.

“The love and respect I have for this man is boundless. You have my word, we will honor his name and the character of “Alan Parrish” will stand alone and be forever immortalized in the world of JUMANJI in an earnest and cool way,” wrote Johnson. But something tells me that a former professional wrestler, involved with franchises like The Fast and Furious, San Andreas, and Baywatch, isn’t all too concerned with preserving the artistic integrity of Jumanji or honoring the legacy of the late, great Williams.

In the original, the character of Alan Parrish emerges from the lost world of Jumanji with a grizzled beard and jungle-chic outfit, forced to reckon with the psychological complexity of returning to real life after decades trapped in a board game, while also facing the loved ones he left behind. That’s some heavy shit. In 2017, we’ve just got The Rock and his gigantic muscles, a shallow caricature of modern masculinity, flexing his way across a landscape that looks a lot like Skull Island from King Kong. What the fuck. The real way to respect Williams’ performance as Alan Parrish would be to avoid a remake or – excuse me – “continuation” altogether.

The trailer reveals the premise of the film: the princess, the athlete, the brain, and the basket case are all sentenced to detention by a no-nonsense teacher. Sound familiar?

That’s because it’s the plot of The Breakfast Club. Then, while the students are cleaning out the basement of their school (which, for the record, seems like a particularly cruel form of punishment, even by American high school standards), the group stumbles upon a device that looks a lot like a Nintendo. They play the Jumanji video game and undergo a Freaky Friday-esque body swap, assuming the identity of the virtual avatar they selected.

Considering all of the terror the original Jumanji board game wrought, forcing Alan Parrish to lose 26 years of his life stuck inside an alternate universe, nearly destroying the town of Brantford, New Hampshire with a stampede of wayward animals, and turning poor Peter Shepherd into a frickin’ monkey, who the fuck would go out of their way to recreate the game for Nintendo??? That’s messed up.

The writers couldn’t even scare up an original name for the movie, so they just decided to borrow from the Guns N’ Roses song “Welcome to the Jungle,” which also provides the music for the trailer. With child-friendly lyrics like, “If you got the money honey we got your disease,” and, “You’re a very sexy girl very hard to please,” or my personal favorite, “Feel my, my, my, my, serpentine,” it’s clear Jumanji: WTTJ is more interested in pandering to aging fans of Axl Rose, than paying homage to the movie it should be based on.

If a movie with The Rock, Kevin Hart, and Jack Black didn’t have enough commercial appeal (and mediocre acting), they decided to throw in one of the Jonas Brothers for good measure. What’s a good sequel without a gratuitous cameo by a pop star, anyway? Nick Jonas’ character looks suspiciously like an ersatz Indiana Jones, complete with a torch and his very own booby-trapped-cave scene à la Raiders of the Lost Ark. Let’s call him Indiana Jonas!

Have you ever seen Without a Paddle (2004)? If not, then you’re not missing much. But if you answered yes, then you’re in good company, because apparently, the design team responsible for the Jumanji: WTTJ poster has seen it too. 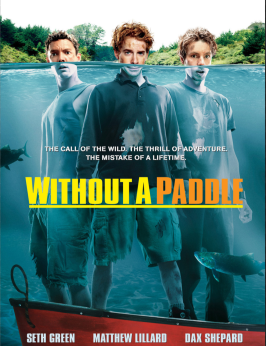 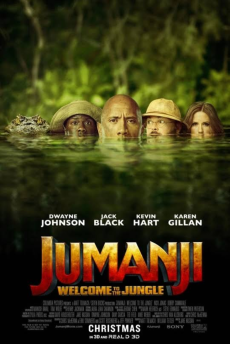 And what about that scene in the trailer where Jack Black’s character, Prof. Shelly Oberon, gets turned into hippopotamus bubble gum? Well, that’s a scene stolen from the movie Deep Blue Sea (1999), when, Samuel L. Jackson unwittingly gets gobbled up by a genetically mutated shark, after giving an impassioned speech to the rest of the crew. (Disclaimer: this is actually kind of scary, and I don’t know why I was allowed to watch it as a six-year-old.)

Something that Makes Me Sad

My favorite part of Jumanji was when Peter Shepherd transformed into a monkey. He was so cute and fuzzy and had a tail! Anyway, I see no evidence in the trailer that a character will turn into a monkey, so I’m a bit sad about that. Why even pretend to recreate the film if you’re going to leave out my little monkey!?

As far as I’m concerned, art is officially dead. I know this because I recently conferred with my 10-year-old self, over coffee at a nearby restaurant. We were able to come to an agreement about the decline of the entertainment industry, although his table manners were atrocious and he was disappointed that I don’t play for the New York Yankees. Sorry, kid.

Anyway, Jumanji: Welcome to the Jungle hits theatres on December 20, 2017, just in time to ruin Christmas (and Hanukkah and Kwanzaa) and everything else that’s good in the world. I hope you don’t see it.