Imagine that you’re a Hollywood executive, and you’re tasked with picking the cast for a movie called, First and Forever, the next big sports blockbuster. The movie features a talented group of football players that learn to set their differences aside to win the ultimate prize: friendship! You receive the following requests from the producer:

Traditionally, acting requires some combination of intelligence/effort/skill/passion, but 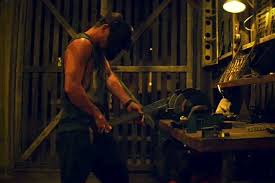 apparently, Magic Mike has learned to hack the film industry. Shirtless guy is the literal embodiment of “dumbing it down”, and is the only person in the history of cinema that has made a career out of playing the strong, stupid type; if that character also happens to have apish posture and regularly appropriates black culture. But I have to admit, when big ears did that dance with the hunk of metal in, Magic Mike XXL I really liked it. Anyway, Chatum is a big box-office draw and attracts the female demographic, so he is going in the movie. And shirtless. Side note: This song is awesome.

Your best wide receiver is the young upstart with blazing speed, a gleaming smile, and an even bigger ego. He’ll never stop telling you how fast he is, especially if he’s wearing nothing but a white towel, or if he’s just shoved a ball into your chest. He probably has a one syllable nickname like blaze, or blam, or dash(ofmind.com), and he definitely went home last night with that girl from the club.

He and the quarterback don’t see eye to eye, because hello, why doesn’t he throw me the ball every time!? But eventually they will set their differences aside at a critical moment, and they – along with audiences across North America – will come to learn the value of teamwork. Not only does Michael B. Jordan perfectly fit this description, he also has the greatest sports name in Hollywood. And for those who are concerned, Jordan was in Friday Night Lights the TV show, which doesn’t violate any of the rules of this exercise.

The athleticism on display here speaks for itself. Now just imagine that violent stride with some pads and a pigskin. I get the sense that Hardy is in a rush, but I can’t understand why he had time to tie his shoes, but couldn’t be bothered to put on something more than a bathrobe. Further, if Hardy had time to put on his shoes, wouldn’t he grab a jacket at the front door? Does Tom Hardy keep bathrobes at his front door???  Also, if you listen closely you can hear someone say, “Just don’t call me a c*nt.”  And while I don’t know the context, I wholeheartedly agree that you should never call someone a c*nt.

This role was hard to cast. We needed to find an actor that could play someone who was, at one time, an undeniable talent. Everything he touched turned to gold. But now, he’s past his prime and it’s time to pass the torch down to the younger athletes. He needs to teach them a little something about respect and the right way to play the game. He’s almost certainly wincing in the locker room as he strips off his pads and just can’t wait to spend some time with his family once he retires. He is desperate for that last chance to make the big play, even if that means making movies like Google Crashers or Hey, Isn’t that James Franco’s Brother? This guy needs to reek of desperation. This guy needs to have chest hair. This guy is Vince Vaughn.

Joe Manganiello is probably the most practical selection for this team. Manganiello is 6’5, 240 pounds and has the big time personality to go along with his position. He has also played a character named Big Dick Richie in the past, which leaves the writers some wiggle room for the locker room/towel-snapping scene. Character traits include obnoxiousness, unwarranted and superficial sense of self-confidence, and liking to sit on the fifty-yard line after midnight with a bottle of wine and a blanket.

This guy loves to sing but absolutely hates racism. He is constantly wondering why we can’t all just be friends, and his only contributions to the team are quippy one-liners from the sidelines. He’s the only person in the history of sport who actually doesn’t mind his spot on the bench, because hey, “Everyone has a role, guys.” Demi Moore’s jailbait is everyone’s best friend and says something funny at an otherwise serious moment in the game. This comment lightens the mood and earns him the affection of the otherwise taciturn quarterback.

Ahhhh, the old curmudgeon who praises the value of teamwork, hard work, and says things like, “Hunny, go upstairs and do your homework.” The man is frustrated by his teenage daughter, and obsessed with watching game tape late into the night (his wife usually reminds him of this). But the man she affectionately refers to as “coach” just has a couple more hours of black and white film to gloss over on his projector, before the big game against (insert division rival here).

Please imagine Cage running up and down the sideline and having one of his signature flip outs, saying things like, “Shit. God Damnit. Jackson can’t catch the ball.” But when he finally composes himself, he harnesses all of that manic energy and gives the most impassioned locker room speech of all time. He says something like, “Let’s go out there, and rip their fucking balls off!!” Then the locker room erupts into a frenzy of male grunting and sweat.

Bradley Cooper is the ideal candidate for QB1. He has the pretty-boy looks, the cocksure charm, and most importantly, he has incredible hair. Much like in the movie business, your quarterback is your box office draw – your leading man, if you will (wink emoji). So it’s important that you pick someone who appeals to American sensibilities.

Cooper has that aura right now coming off a role as an American war hero, and because he played in a movie based on a comic book. It’s really that simple! Speaking of his movie roles, did anyone else feel like it was a little bit ridiculous that Cooper was married in the first Hangover film?  If they wanted the movie to be realistic, he should have been written in as a shameless womanizer taking on Vegas for his buddy’s bachelor party. I want to know what it’s like to be Bradley Cooper in Vegas. In fact, I would watch an entire TV series dedicated to watching Bradley Cooper politely declining the advances of women in Vegas. The Vegas thing really matters to me.

Anyway, Cooper’s playing style in this film is some combination of Aaron Rodgers and Drew Brees. He also happens to be an egomaniac that is more concerned with renegotiating his contract than the success of the team. QB1 really doesn’t care about anyone else, and largely plays to pad his stats and build his personal brand; Cooper can sling cologne as well as he can sling passes from the pocket. So, considering some combination of box office appeal, career timing, and physical attributes, it’s clear that Cooper is the best man for the role.

All of that being said, we are offering the role of QB 1 to Adam Sandler!!!

YOU CAN’T MAKE A FOOTBALL MOVIE WITHOUT ADAM SANDLER!!!!

Another One of Sandler’s Friends: Steve Buscemi