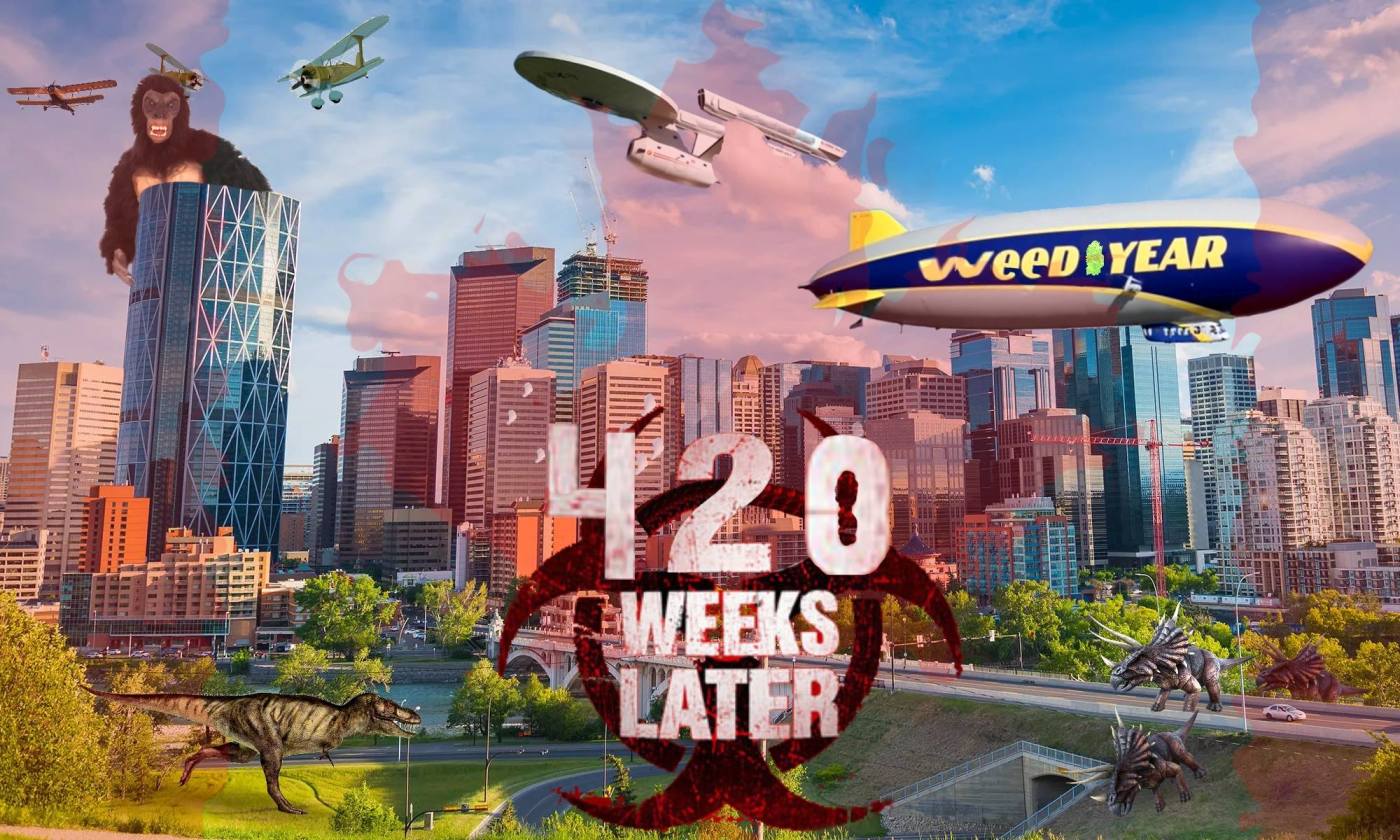 On October 17, 2018, the great country of Canada legalized marijuana. It’s unclear how this change in policy will affect citizens North of the Border, and, in fact, it could take years to see the results. But that didn’t stop Neil Hamel, our Chief Creative Officer, from looking into the future and imagining how the decriminalization of kush could alter the Canadian landscape. Naturally, the images below are the offspring of his supernatural imagination.

Please Step Into the Time Machine

If you’re reading this, it’s too late. You’ve entered a future Torontonian dimension. The area code is 420. Your affectionately named hockey team is now the Toronto Maple Weeds. An alien race is using the CN Tower as a hookah. And much, much more…

The once-bustling oil hub has discovered a new primary resource. The surrounding farmland, which used to be decorated with pumpjacks, now provides a rich and plentiful harvest of cannabis. Trademarks of a proud city have been altered, for better or worse. The Calgary Stampede has been rebranded as A Week of Total Paranoia; the Calgary Flames, a perennially disappointing hockey team, have adopted a new motto: Let’s Get Blazed; and the Calgary Tower burns brightly.

Not much happens in Manitoba, especially not in the future. In fact, what you see below is the entire province. Wilson, who you may recognize from Home Improvement, peeps creepily over a bale of hay. The newest season of Tool Time, which airs exclusively on “The Smoking Network,” features Tim Allen and Al Borland conducting nutso experiments in green skin suits. There’s a Gorillanoceros hunting for cows, too!

Things are looking grim in the land of the separatists. The Apes have pillaged the city’s supply of maple syrup, and they’re using it to satisfy their primordial case of the munchies. According to my eighth-grade science textbook, which says that the sky is just a reflection of the ocean, our bodies of water have turned into a blotchy, red tableau. Viva La France!!!

Poor Vancouver. They took pride in being the most progressive city in Canada, known for their liberal approach to smoking ganja, and various contributions to the arts. But once the Federal government gave green the go-ahead, Vancouverites spiraled into an existential crisis. So, the citizens attempted several brazen stunts to secure a new local identity. A group of local hipsters purchased a pirate ship and tried to pillage the city. A student at UBC, disillusioned by his school’s fall from cultural relevance (not to mention his inability to find a suitable ogress), tried to gin up some publicity by waterskiing behind The McBarge. Nothing, he couldn’t even get a photo in The Ubyssey. What a fail!!!

Anyway, thanks for taking a trip into the future. Who knew that Justin Trudeau’s government would wreak such havoc on an otherwise peaceful country? I’ve also got some bad news. At this point, we don’t have the technology to get you back home, but there’s a really cool doctor working on the problem. Good luck!